Another 2014 Honda Motorcycle Announcement was made to us Honda PowerSports Dealers this morning. Honda has kept all of us Dealers on our toes the last 12-18 months with all of the new and exciting models they have been pumping out for the 2013 / 2014 model years. Honda's slogan for this release of "Still on the gas" is spot on! Honda has been unstoppable with one new model after the other and just when we think they may be slowing down, they surprise us with the announcement of another new model, and this hasn't stopped going into the 2014 Honda motorcycle model lineup.

Before we get to the models listed below that we actually have information on... Here is a little bit of a sneak peak (video below) at THREE All NEW models that will be releasing in 2014 for the 2014 Honda Motorcycle lineup. 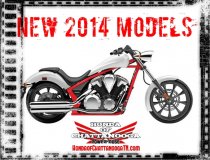 Stay tuned into my Blog for an update on what those (3) models are underneath the covers!


Until the release of the models in the video above, let's get to the 2014 Honda models below that we do have information to share on at this time...
This release is for some of the more popular Honda cruiser models that will be returning for the 2014 model year. Models ranging from the ever so popular with both beginner riders and experienced alike, the Honda Rebel 250. Up to the Honda chopper, the 2014 Fury, a motorcycle that shocked the industry back in 2010 when it was first released. Of course a lot more in between too, like the Shadow / Stateline / Sabre / Interstate XR650L - I'll go over them below. You'll also find a break down on MSRP prices for the 2014 models and their release dates too. Keep in mind that the prices you see below are Honda's Suggest Retail Price, our 2014 Honda Motorcycle Sale prices will be lower but due to Honda's new Minimum Advertised Price policy are prices are too low to advertise. You can request our price by clicking on the link for each model below.