Kawasaki Motorcycles Dealer near me 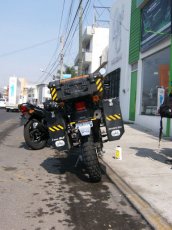 While our time in Puebla David and I left the bikes at the Kawasaki dealership to get serviced for the long road ahead.

Our mechanic
We were lucky enough to find out the mechanic also owned a KLR and had every nice little modification you could think of, so we knew we were in good hands.This is him and his ride
David took the opportunity to get a quick tennis game in with the local tennis pro.
I took the opportunity to hang out with the mechanic and had him teach me everything he knew the entire day as he took apart the entire bike and showed me everything there is to know on maintenance and tune ups, including disassembling the entire carburetor and putting it back together.
I’m happy to say I can down almost completely take apart a KLR and fix almost any issue with it and rebuild it.
We became such good friends at the end and was happy to have company the whole day, he even gave me a cool bracelet that looks like an enduro motorcycle tire as a reminder of our time together. Let the bracelet collection begin! Again!
Be sure to visit Carlos Becerra at the Kawasaki Deapership in Puebla Mexico - 31 Poniente 3512 Sta Cruz los Angeles
222-249-82 12
kawasakipue@yahoo.com 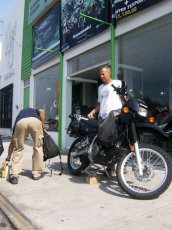 We also visited the museum Amparo en Puebla, which is considered the second most important museum in all

Mexico after the anthropology museum, which we also already visited.
David and I also played some ping pong
And found an indoor rock climbing wall place in the middle of the city, what luck right.
Saw some mass demonstration by local farmers driving right into the city with their tractors, which disrupted a tour we were going to do.
And a guy with lots of balloons
And David kindly took a picture of this couple we passed and an hour later on the way back hadn’t moved an inch from the same position, it was quite impressive. Dedication
Had some cool parking at the hostel we were at.
We finally left Puebla after 3 days. I’m glad we got to see such an amazing city, definitely on the top places to see in Mexico.The following day we left for Oaxaca. 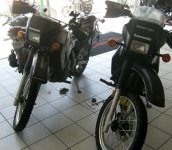 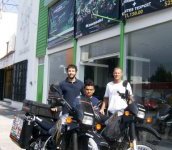 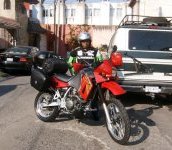 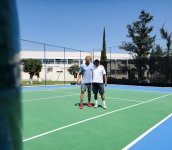 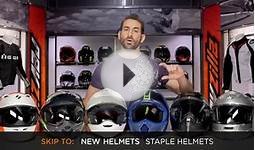 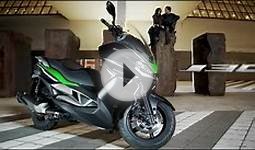 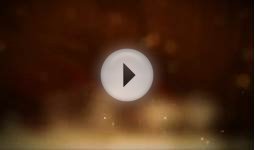 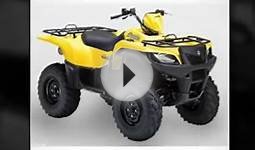