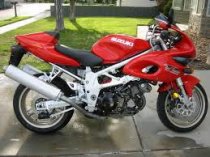 Suzuki’s launch of the TL1000S seemed to herald a new era of V-twin Japanese super-sports bikes. The TL’s powerful 996cc, eight-valve engine was held in a light and technically innovative chassis; and the half-faired Suzuki was stylish, aggressive and competitively priced. This was the automatic suzuki motorcycles that proved the Japanese could build exciting V-twins, and which promised to give Ducati some serious competition.

Unfortunately for Suzuki, that was not how things worked out. The TL1000S was introduced to near universal praise, for its stunningly powerful and torquey engine and also for its handling and high level of technology. But that agility occasionally turned into instability. Rumours of severe wobbles (‘tank-slappers’) caused the TL to be recalled for fitment of a steering damper. Its sales never recovered.

In reality the scare stories (which appeared in only a few countries) were often exaggerated, and the TL1000S was in almost every respect an outstanding superbike. Its engine was a liquidcooled, dohc 9O-degree V-twin. A ram-air system fed a Mikuni-Denso fuel-injection set-up, giving a maximum output of 123bhp at 8500rpm – more than both Ducati’s 916 and also Honda’s VTR1000F, the less charismatic rival Japanese V-twin that was launched at the same time

The frame was a tubular aluminium construction that incorporated a unique rear suspension system consisting of a single spring (placed near-horizontally on the right) and separate rotary damper. This compact arrangement allowed the engine to be placed further back, giving a short wheelbase for extra manoeuvrability. Other cycle parts were conventional and of high quality, notably the multi-adjustable, upside-down Kayaba forks, and the front brake combination of 320mm discs and four-piston Nissin calipers.

The Automatic Motorcycles was a real star, with all the performance and character of a good V-twin. The TL pulled crisply at low revs and was wonderfully strong through the mid-range, giving enough instant acceleration to lift the front wheel with a gentle twist of the throttle. And the free-revving engine really took off at 6500rpm, sending the tacho needle shooting round to the 10, 500rpm redline, and hurling the Suzuki forward towards a top speed of l60mph (257km/h) 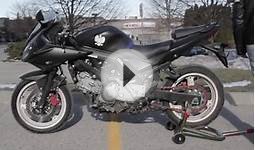 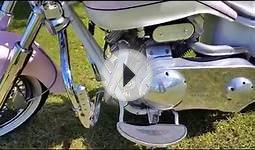