Question: I theorize that one of the main reasons we don’t have modern two-stroke streetbikes is that consumers prefer the sound and feel of a four-stroke. And when I look at the 40-year-old two-stroke technology of my three Kawasaki triples, I wonder what a truly modern two-stroke street bike would be like. If manufacturers used the latest technology, what would be the configuration and output of modern large capacity two-stroke for, say, a sportbike or a naked standard?

Answer: Two-strokes left the market because they could not meet steadily-tightening EPA standards for vehicle exhaust emissions. The very feature that makes two-strokes attractive—the simplicity of having only three moving parts (crankshaft, con-rod, and piston—was also their undoing.

A four-stroke engine has a separate piston stroke for each of the four functions necessary to a spark-ignition engine: intake, compression, power, and exhaust. This separation is made possible by the provision of mechanically operated valves for intake and exhaust functions.

In simple two-strokes, valving is provided by the motion of the piston, sliding past port openings in the cylinder wall. The above four functions must be crowded into just two piston strokes. As the piston descends on the power stroke, at roughly half-stroke it begins to uncover a large exhaust port or ports, and exhaust gas begins to leave the cylinder. A quarter-stroke later, the piston uncovers a set of fresh-charge transfer ports. Fresh air and fuel have meanwhile been drawn into the crankcase, and the descent of the piston compresses this fuel-air mixture. As the transfer ports open, this mixture begins to jet into the cylinder through them.

Here is the problem: Even with the best-possible aiming of the transfer ports (to keep the entering fresh charge away from the exhaust port, and send it on a long looping path that fills the cylinder), some fresh charge does “short-circuit”, and flow directly out the exhaust. This loss of fresh charge to the exhaust is a direct consequence of having exhaust and transfer ports open at the same time. In a four-stroke, this is prevented by the use of mechanically operated valves. 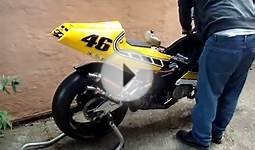 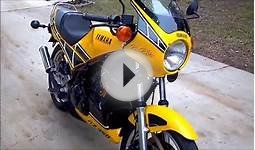 RT @marcpotter: Dear Yamaha, just wondered if you have any spare race bikes kicking around for a TT parade lap? Thu, 4 June 2015 04:52 PM